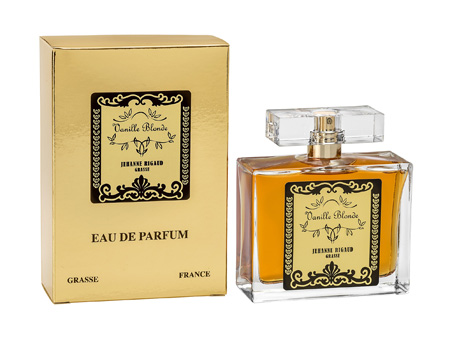 Vanille Blonde by Jehanne Rigaud Parfums  - Vanilla (Vanilla fragrans) is the only species of orchid to have edible fruits, called pods, dark brown in color. Vanilla originates in Mexico, where it grows spontaneously and only in 1500 came to the rest of the world thanks to Hernando Cortèz who exported it to Spain, immediately falling in love with the most refined Europeans, including the apothecary of Queen Elizabeth I of England.

The most valuable variety is Bourbon Vanilla, which grows in tropical areas, particularly in Madagascar and in the Réunion Islands, once called Bourbon Islands.

After harvesting, the fruits are immersed in hot water and left under the sun in wooden box to dry. This procedure gives the classic brown color and the sweet and woody scent that characterizes the soft and fleshy Vanilla pods.

The essential oil of Vanilla, with an extremely rich scent with an animal background, due to the high cost of the raw material, is mainly extracted in absolute. A dark brown liquid fragrant obtained through maceration.

The scent of Vanilla has a strong power of seduction, its hypnotic sweetness goes straight to the heart of those who love it and can recognize it among a thousand essences, because nothing satisfies the senses as its softness. Vanilla has historically been defined as the most delicious of all spices and since the 1700s it has been considered a powerful aphrodisiac because of the tantalizing effect it arouses in the wearer.

A sublime fragrance where the Bourbon Vanilla from Madagascar joins the balsamic notes of the benzoin and the sweet ones of the star anise, making it a magical and intoxicating essence.